Hair: White, Wavy with a Long Tail at Base of Neck Background: Born of a Dragon whom had her soul sealed away within the body of a half-elf priestess and her memories temporarily suppressed, and a powerful, magically engineered Amalgam creature, Sparius belongs to a unique race called a (Clauresian) Draquir. He is a blend of Elf, Human and Dragon-Blooded Claurefram. This blend provides him an array of attributes and characteristics that make him a powerful entity. From his human ancestry, he is blessed an agile and adaptable mind and a charming and affable demeanor. From his Elven heritage, he is blessed with longevity, agility, and an uncanny affinity for the arcane. His Claurefram blood drives him to strive to be better and challenge himself while also granting him a hearty constitution and a strong connection to the elements, especially Ice and Air. The Draconic blood that runs though his veins grants him a dense musculo-skeletal frame that imbues him with greater strength and speed and a slightly augmented healing factor. In addition to these benefits, He also has Dark Vision out to 30 feet and Low-Light Vision out to 180 feet. He has a resistance to non-magical poisons and all acids, Immunity to cold and ice lightning and the element of air, He can endure heat and is partially/conditionally immune to fires and flames.

History: An orphan born in Waurlrie, but raised in Bandushol, Iaspar lived his whole life in the desert. He was given away by his dying mother to the Dulain family not long after his birth. However, around age 6, a plague swept through and killed his adoptive family. Since then, he has been a street urchin and had to join a gang to survive. This was until he met The Dragon Queen, who cared for and looked after him, taking him into her surrogate family around age 11. She taught him to read, write, fight, and hunt.

When she suddenly went missing one day, He set off, destined to find the only living family he knows of. This journey has brought him across the Great Ocean and eventually to Taltuoa.

Since arriving in Taltoua, Spar has reconnected with The Dragon Queen and met and trained under Alessa to better hone his skills, his mind, and teach him how to be a good man. Over the past few years, his desert complexion has softened and he has undergone a major growth spurt, shooting up 8 inches since his arrival to the Seridian Peninsula. And, he's still growing.

For the past few years year, he'd been undergoing intense training and schooling under the tutelage of Lilien Silverthorn, Alessa's granddaughter. He was a resident of the newly-built Tower of Silverthorn in Taltoua for that entire time.

With the wars raging between Bandus and Hexia's nations (Bandilstat and Vodahmin Brii) against the defectors (the Clauresian Shadow Army) and disenfranchised (Blackstone's Hammer and the Coalition of the Exiled), there was fear for Sparius' safety. So, he was sent away from Seridia to Auglire to learn everything he can about their unique magics and culture, ostensibly as part of his studies at the Silverthorn Tower. Since arriving there, he has fallen for the Princess Eloisa and begun his training with Victis, Alessa's former sword, which had been bequeathed to him upon her "retirement" in a very surprising turn of events. He was no master swordsman or hero or leader as of yet, but she apparently saw great potential in him to do great things. For now though, he is busy being a kid and learning to be the best he can be at everything he sets himself to, and enjoying every moment of it.

Since leaving Auglire, Spar has returned to the continent as a wandering swordsman and mage, helping those in need and learning as much as he can in his travels. So far, his travels have taken him from Pendula to Cygnal, Auglire to Vodahmin Brii, and even Nu'uk and many places in between. Most recently, he spent seven weeks training under Giger Van Gogh in Ninjitsu and Martial Arts. Having just completed his training with him, Spar has found himself apprenticed to Lilien's sisters, Celine and Mara and is now on to his next adventure and learning experience, hoping to soak up as much knowledge and see as much of the world as he can before finally confronting whatever destiny fate has set him out for. Powers:: Innate and in-born Aquamancy, Aeromancy, Cryomancy, Umbramancy, Draconic Aura of Majestic/Frightful Presence, Strong Resistance to Non-Magical Poisons and All forms of Acid, Immunity to Cold and Ice Lightning and the Element of Air, Endurance to Heat and Partially/Conditionally Immunity to Flames and Fire

Skills:: Mastery at Lock-Picking, Mastery with a Knife or Dagger, Mastery in Sleight of Hand and Pick-Pocketing, Exceptional Acrobatic Skill, Uncanny Magical Aptitude and Attunement, Expert Survivalist(Hunting, Foraging, ), Expert practitioner of Stealth, Trained in the Auglirean Style of Pyromancy by Princess Eloisa, Martial Weapon Proficiency with a Specialization in Swordsmanship and Two-Weapon Fighting, Proficient Practitioner of Kage Kame Ryu Ninjutsu and Modified Kyokushin Karate (2nd Kyu), Trained in use of the following Ninja/Martial Artist Weapons [Ninjaken, Tonfa, Kunai, Sai, Bo, Nunchaku, Kusarigama, Blow Gun], Novice in Poison-making and Compound-Mixing/Alchemy, Trained in the ways of the Royalty Nobility and Aristocracy

Shokusha-ken: (Lit. meaning Rapid Fire Fist.) By developing his muscles and in turn, his speed, Sparius can deliver a quick flurry of fast, hard hitting punches onto the opponent's body, leaving them bruised, battered and possibly even stunned. The punches are directed to the lower abdomen, chest and head to deliver multiple bodily impacts. Sparius can further enhance this technique by channeling his Ki into his bones and muscles, further fortifying them to make them stronger and much faster to deliver Ki infused blows onto an opponent with extremely devastating results-- this subset technique is known as Mouretsuna-ken (Lit. meaning Rapid Violent Fist).

Kage No Senpuu Kyaku: (Lit. meaning Shadow Whirlwind Kick.) Inspired by the kicking techniques of Tae Kwon Do practitioners, this technique was developed by Giger Van Gogh to further add an arsenal of kicking techniques into the Kage Kame-ryu style of Ninjutsu and passed onto Sparius. It is a combination of body mechanics and momentum where the user turns rather quickly to build up the speed and power of the technique, while performing a powerful leap. As the user turns while airborne, multiple kicks consisting of a roundhouse kick, back thrust kick and another roundhouse are utilized. Skilled practitioners can perform up to four kicks in succession in one fluid motion if enough momentum and body movement is utilized to deliver stunning blows onto the opponent. By infusing his Ki into the technique, this technique becomes the sub-set skill Bouryoku Senpuu Kyaku (Lit. meaning Violence Whirlwind Kick) where the user can deliver faster, harder, and a higher number of multiple kicks onto an opponent. This could potentially leave an opponent battered, possibly with broken regions of their body.

Uraate: (Lit. Backing/Reverse Striking) This is a fulcrum-based transference skill; an example of Ki transmission that teaches one to shift the point and force of impact by striking the dead center of an object. At expert-levels, a practitioner can transmit the force of impact wherever they please, as long as a medium exists to transmit their power through. This is ideal for handling armored opponents, and could potentially kill a person if a vital area is stuck. Magical Dagger given to him by The Dragon Queen
Masterwork Dagger given by Alessa (He's working on imbuing it with magical properties)
Hielport (Found discarded after Bandus' Battle against Giger/Shellshock)
Victis with Special Scabbard
Flintlock Pistol with 20 Bullets
Assortment of Kunai and Shuriken (Fastened to Utility Belt)
Ninjaken
Wand of Earth-bending (12 Charges. Doubles as Blowgun.) 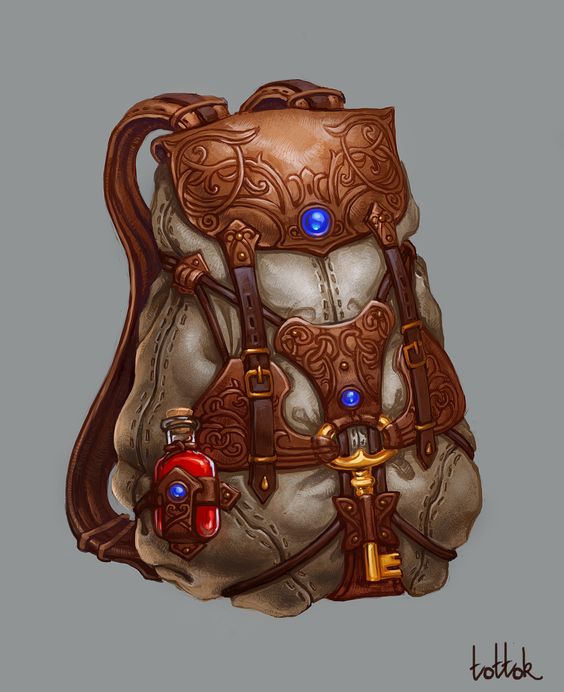